Astronomers, using data from India’s Giant Metrewave Radio Telescope (GMRT), have discovered two of the most powerful phenomena in the universe – a supermassive black hole and the collision of giant galaxy clusters about two billion light years from Earth.

By combining data from NASA’s Chandra X-ray Observatory, the Giant Metrewave Radio Telescope (GMRT) in Pune and other telescopes, researchers found what happens when matter ejected by a giant black hole is swept up in the merger of two enormous galaxy clusters.

“We have seen each of these spectacular phenomena separately in many places,” said Reinout van Weeren of the Harvard-Smithsonian Centre for Astrophysics (CfA) in the US, who led the study.

“This is the first time, however, that we see them clearly linked together in the same system,” said van Weeren.

This cosmic double whammy is found in a pair of colliding galaxy clusters called Abell 3411 and Abell 3412 located about two billion light years from Earth.

The two clusters are both very massive, each weighing about a quadrillion – or a million billion – times the mass of the Sun.

The comet-shaped appearance of the X-rays detected by Chandra is produced by hot gas from one cluster plowing through the hot gas of the other cluster.

Optical data from the Keck Observatory and Japan’s Subaru telescope, both on Mauna Kea, Hawaii, detected the galaxies in each cluster.

First, at least one spinning, supermassive black hole in one of the galaxy clusters produced a rotating, tightly-wound magnetic funnel. 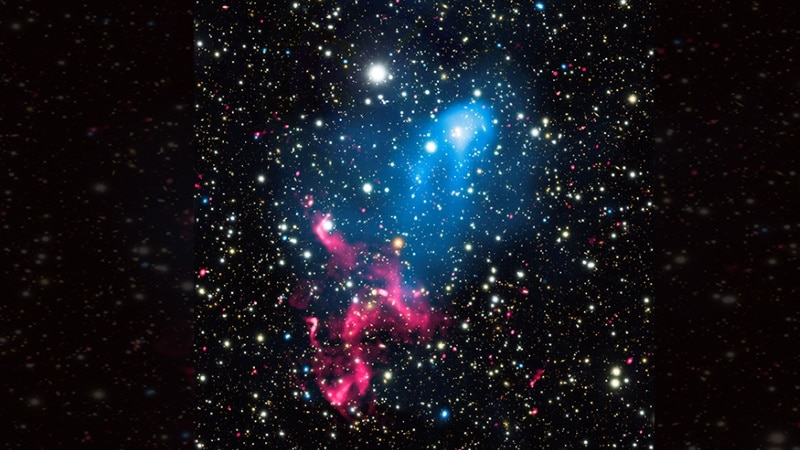 The powerful electromagnetic fields associated with this structure have accelerated some of the inflowing gas away from the vicinity of the black hole in the form of an energetic, high-speed jet.

These accelerated particles in the jet were accelerated again when they encountered colossal shock waves – cosmic versions of sonic booms generated by supersonic aircraft – produced by the collision of the massive gas clouds associated with the galaxy clusters.

“It’s almost like launching a rocket into low-Earth orbit and then getting shot out of the Solar System by a second rocket blast,” said Felipe Andrade-Santos, also of the CfA.

“These particles are among the most energetic particles observed in the universe, thanks to the double injection of energy,” said Andrade-Santos.

This discovery solves a long-standing mystery in galaxy cluster research about the origin of beautiful swirls of radio emission stretching for millions of light years, detected in Abell 3411 and Abell 3412 with the GMRT.

The team determined that as the shock waves travel across the cluster for hundreds of millions of years, the doubly accelerated particles produce giant swirls of radio emission.