Breaking News
Home / Food / One of These is the Cronut, The Other is Food Plagiarism – And You Can’t stop It

One of These is the Cronut, The Other is Food Plagiarism – And You Can’t stop It

To taste a Cronut – an actual, legit Cronut – you must be willing to brave the sea of humanity that amasses each morning outside Dominique Ansel Bakery in Manhattan.

You can also go to a Dunkin’ Donuts in pretty much any city and order something that’s kind of like Ansel’s iconic pastry, cut from croissant dough and then deep fried. Or, in Sacramento, you could have a Doissant. In San Francisco, you can scarf down a Cruffin, which is not a doughnut at all, but hey, close enough.

Given how fast food trends emerge and travel, it’s not surprising that there’s a Cronut, or Faux-nuts.
But the hottest food trend of the past five years may be copycatting. Call it food plagiarism.
And the examples go way beyond the Cronut. 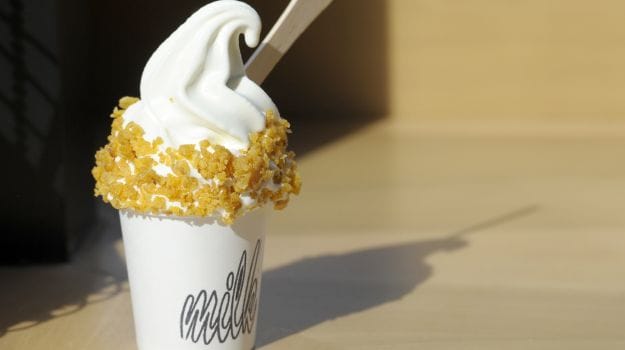 Kimchi quesadillas and short-rib tacos were the brilliant pairings that launched Los Angeles’s Roy Choi and the Kogi food trucks – and then set off an echo-boom of Korean-taco knockoffs. New York’s Doughnut Plant claims to have cooked up square jelly doughnuts nearly a decade ago; but now you can have one at Washington’s Astro Doughnuts. Do you drool over the over-the-top cakes with ganache drippings that Australian home baker Katherine Sabbath posts for her nearly 300,000 Instagram followers? Buzz Bakery can sell you an “homage,” and so can plenty of other shops from New York to California.

And for a doughy bun overstuffed with a slab of fatty pork belly and a schmear of hoisin, you can head to one of the restaurants in David Chang’s growing Momofuku empire, or any of the quintillion American ramen shops made in Momofuku’s image.

“Once upon a time, a chef produced something, and it slowly made its way around, by people eating there, by word-of-mouth, by traditional media,” says David Sax, author of “The Tastemakers,” which traces the evolution of food crazes. This is how it worked in the days of the Caesar salad and the baked Alaska.

But if cooking has always revolved around adapting and perfecting existing dishes, why does this feel different? One word: speed. “It’s happening so quickly, it’s impossible to control,” says Sax.

Point a pastry-cream-covered finger at Instagram, which provides the blueprints for bakers in Ohio and Jakarta to start food-coloring perfectly good bagels the unholy hues of a Grateful Dead T-shirt. And don’t forget the foodies, eager and willing to gobble up the edible equivalent of a fake Fendi bag.
But unlike the purses of Canal Street, food copycats may even affirm the value of the real deals and turn an unknown chef who spawns a trend into a household name.

If no one copies your pork bun or your rainbow bagel, “if nobody cared enough to even imitate it,” says Sax, that means “it doesn’t resonate with anyone.”

James Beard Award-winning chef Mike Solomonov and his business partner, Steven Cook, have opened several popular Philadelphia eateries: Israeli restaurant Zahav; a hummus place known as Dizengoff; and a Korean-chicken-and-doughnuts joint called Federal Donuts. And his fans, he says, email him when they spot what look like plagiarists.

“It’s sometimes a little bit weird,” Solomonov confesses. “You’re, like, ‘Wow, they’re doing Korean fried chicken and doughnuts?’ Wouldn’t they want to do something different?” But he’s learned to shrug it off. “We didn’t invent Korean fried chicken, and we didn’t invent cake doughnuts,” he says. In fact, he’s convinced that somewhere in Israel, a chef is looking at his restaurants and yelling, “What the $*#)?”

“We all copy each other anyway,” he says. “Especially when you’re young and inexperienced – you do what you know is going to make people happy.” Sometimes, however, the plagiarist isn’t a naive young chef. Burger King boldly hawks the Big King, which is exactly what it sounds like: an uncanny match, double patty for double patty, sesame-seed bun for sesame-seed bun, for McDonald’s Big Mac. Another burger chain, Red Robin, has begun serving a towering new sammy that unabashedly apes New York chef Keizo Shimamoto’s behemoth trend food, the Ramen Burger, with buns made of noodles.

In March, frozen-yogurt chain 16 Handles unveiled MMMilk & Cereal, a cornflakes-flavored treat that chief executive Solomon Choi proudly declared “you won’t see anywhere else.” But we have: At Milk Bar dessert shops, where Christina Tosi’s Cereal Milk soft-serve has been one of the most iconic sugar rushes of the past decade. “MMMilk & Cereal” was hastily renamed “Cereal Bowl,” but it remained on 16 Handles’ taps.

How is that possible?

Chefs can protect the names of their unique creations – think Boardwalk Fries, the Cronut or Coca-Cola – says Michael F. Snyder, a Philadelphia lawyer experienced in food industry intellectual property law. It’s far harder, he says, to prove that someone’s dish is a knockoff, mostly because it’s a high bar to prove that yours is original.

What about a recipe? Forget it. In the eyes of the U.S. Copyright Office (and the courts), recipes are just lists of ingredients that can’t be copyrighted; neither can a chef copyright a work derived from something that already existed. And what chef can argue that they’ve created not only a new dish, but also the cooking techniques that went into it?

Designs, like the ridges in a Ruffles potato chip, can be copyrighted if they’re unique, Snyder says, but once a chef cooks a dish on a television show or publishes a cookbook, a business secret becomes fair game. Even so, Ansel published a version of his Cronut recipe for home cooks. “I don’t think worrying about imitators is a healthy way to create,” he says by email. “Protecting yourself and your intellectual property is something I’ve had to learn to do.”

Ansel trademarked the Cronut name, but not for the reasons you might expect. He was prompted, he says, by “trademark trolls, who sweep in and trademark something they didn’t create and later prevent the creators from using the name.” And he doesn’t think that plagiarism is just part of the business. “Quite the opposite, actually,” he says. “I think the nature of the business is for chefs to create and express their own styles.”

For eons, dining has evolved as ideas are built upon ideas. A new dish tweaking some stale old dish emerges. Chefs also pass on techniques to their underlings. “Plenty of people know how to make our hummus,” Solomonov says of his former chefs. “There are no secrets.” A restaurant’s real intellectual property, he argues, are the intangibles: service, consistency, mood and ambience. “It isn’t the recipes at all.” Perhaps this is why chefs rarely call one another out publicly for food plagiarism but do frequently accuse each other of stealing a concept, a name or a restaurant’s look. Often, they do it in a good old-fashioned legal filing, says Snyder.

In one of the most memorable cases, the U.S. Supreme Court weighed in on whether a Texas fast-food chain, Two Pesos, had mimicked the appearance of another, Taco Cabana. It awarded millions to Taco Cabana. In New York, the Kati Roll Company sued in 2014 when a competitor opened with a similar name and common colors in its logos and interior design, not to mention dishes that smacked of food plagiarism.

The rival’s response? If the food was similar, wasn’t it because both restaurants served traditional Indian food, which is thousands of years old? The other restaurant eventually changed its name, but it had a point. Who can lay claim to dishes that seem to have appeared out of nowhere and spread like wildfire? Who knows who fried the first batch of crispy Brussels sprouts, or who first eyed a flavorless iceberg-lettuce salad and decided to use kale instead?

It’s an “industry where no idea is truly original,” says Sax, although these days, chefs do “take credit for stuff. They Instagram it, and they hashtag it. That’s the currency by which they’re building their brand.” David Chang, he says, didn’t create ramen. “Dominque Ansel did not invent doughnuts or croissants, or even some cream-stuffed proofed dough pastry.” Of their copycats, Sax says, “while it may seem like intellectual thievery and rip-offs, fundamentally, this is how the culture of food moves forward.” “If a chef puts something on their menu that they weren’t the first to do, that’s not a crime. That’s cuisine.”

Previous How to Write a Blog Post: A Simple Formula to Follow
Next Isro Says Chandrayaan II Will Be Indigenous, Take Minor Help From US