Kolkata: Mohun Bagan packed a punch in a 3-1 drubbing of Singaporean heavyweights Tampines Rovers to become the first Indian club to win a match in the AFC Champions League qualifier at the Vivekananda Yuva Bharati Krirangan in Kolkata.

Mohun Bagan’s Haitian recruit Norde made the difference on a day Cornell Glen had a miserable run that included missing a penalty.

Trailing 1-2, the Singapore League runners-up started strongly in the second-half but before they could bring on the equaliser and take the match to extra time, Mohun Bagan’s Japanese recruit Katsumi Yusa confirmed their tickets to China with his 83rd minute strike from Sony Norde’s corner.

Norde set up both Jeje and Katsumi as the I-League champions today created history by becoming the first team to win a match in the ACL.

Mohun Bagan will now travel to Chinese city Jinan to clash against Shandong Luneng FC in the Preliminary Stage 2 on February 2.

Shandong Luneng FC are placed third in the Chinese Super League and it will be a real challenge for Mohun Bagan to play in Jinan where the temperature is sub-zero.

Four teams will make the cut from Preliminary Stage 2 to the East Zone play-off. 16 teams in two groups of East and West will lock horns in the Playoff Stage to determine the eight qualifiers for the Group Stage of the ACL. 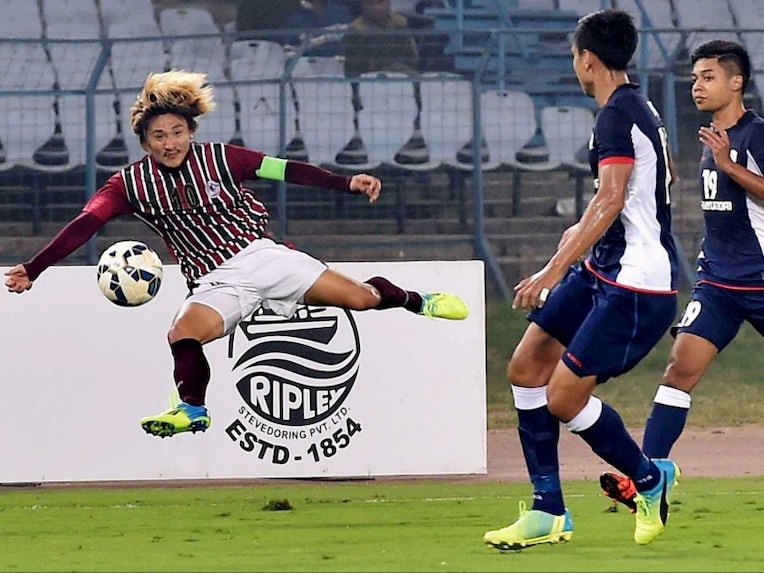 This is also Mohun Bagan’s first win against the Singaporean outfit against whom they drew at home and lost away in the AFC Cup in 2007.

Coach Sanjoy Sen chose to start with the in-form India forward Jeje and his spirited runs combined with Cornell Glen and Sony Norde’s pace unsettled ‘The Stags’ defence early on.

The Mizoram forward, who was benched in their 1-1 draw in the I-League derby versus East Bengal, handed Mohun Bagan an early lead putting the ball to the far post in what was a result of a brilliant move from Norde.

The Haitian cleverly tackled the Singaporean outfit’s South Korean recruit Kwon Jun from the left before giving a backpass to Dhanachandra who crossed it to Jeje for their rousing start in front of a sparse crowd in the gigantic stadium.

What followed was a sheer dominance from Mohun Bagan as Norde toyed with ‘The Stags’ defence.

Mohun Bagan, however, missed a penalty as well as a couple of golden opportunities as they held their slender lead before Glen made it 2-0.

It was Norde who missed a long ranger in the 21st minute before Glen let the team down six minutes later after being set up brilliantly by Katsumi from the right.

With Tampines Rovers defender fumbling, Yusa’s cross was neatly received by the Trinidadian shot it over the bar.

Continuing his miserable run, Glen missed to convert from the spot as he shot straight into the hands of Tampines Rovers goalkeeper Izwan Mahbud in the 34th minute.

Moments later, Jeje fumbled to bring up his second after being set up by Norde as Mohun Bagan struggled to convert their chances till a defensive lapse from the Singaporeans.

Norde was once again instrumental in bringing up a second goal when he dribbled past the Tampines Rovers defenders. The goalkeeper lost control and Glen this time found his act right just in front of the goalline with his tap-in.

But their 2-0 cushion was shortlived as a minute later Kingshuk Debnath conceded a free kick by bringing down Hafiz just on the edge of the box and an unmarked Hanipi pulled one back just before the break.

The Stags, playing with the lone forward in the S-League top scorer Nawaz, looked to bounce back after the changeover as they had more setpiece movements but an equaliser continued to elude them.

Three minutes into the second half, the visitors almost brought on the 2-2 equaliser when Fazrul found the back of the net but only to be ruled off side.

The visiting side gradually started to find their feet by building pressure on the I-League champions. Nawaz missed a freeheader after Mohun Bagan defender Luciano Sabrosa failed to control. It was a see-saw contest in the second-half with Mohun Bagan surviving a few scares.

But before the Singapore side could force an equaliser, Mohun Bagan’s Japanese recruit Yusa sealed the home side’s win with his powerful rightfooter after being set up by substiture Prabir Das’s header from a Norde corner kick.

Madrid: Barcelona and Argentina star Lionel Messi’s trial for tax fraud has been reset to …